Globally, celebrities thrive on publicity and it’s not surprising that they are often the most talked about in every society; everything about them makes the news.

A huge number of people in the entertainment industry often try to portray a perfect life by concealing their struggles and feeding the public with a utopia.

But over the years, events have shown that celebrities are also vulnerable individuals who struggle with different aspects of their lives. A common aspect of such struggles is in their marriages.

Marriage, they say, is a lovely union between two people. And when it occurs in the world of celebrities, it exudes fairytale vibes that make many people ask, “God when?”

However, many of these fairytale celebrity marriages usually end up with a lot of drama, conflicts, and “breakfast” as added baggage.

In recent months, several celebrity marriages have crashed in Nigeria — to the chagrin of those who look up to such unions for inspiration.

When such happens, it usually quashes the hopes and fantasies people have about celebrity marriages.

It should also be noted that they are celebrities who have been married for over two decades; they include Olu Jacobs and Joke Silva, Peju Ogunmola and Sunday Omobolanle, and Gloria and Nobert Young, among others.

Several factors have been identified as reasons for the growing trend of failed celebrities. They include the following:

Making sure marital troubles are kept away from the public eye is the key to the majority of happy marriages.

However, the same could not be said for Akindele’s marriage with JJC.

The pair frantically attempted to handle the situation on their own despite the fact that it was very evident that their ship was in troubled waters.

On numerous occasions, Benito divulged controversial details about the lovebirds, thereby undermining the couple’s seemingly efforts to keep their troubles away from the internet.

This is one of the major causes of failed celebrity marriages.

From Adekoya to Akindele, infidelity was a prominent allegation. In May, Benito had claimed JJC Skillz and Akindele were both cheating on each other — an allegation debunked by the singer.

Managing egos among celebrities is a difficult task and that often leads to the collapse of celebrity marriages.

In Nigeria, some argue that when a woman is rich and successful, she will accord zero or little respect to her husband.

Superiority complex basically means when a person feels superior to another due to factors such as fame or wealth.

A few hours after the announcement of JJC and Funke’s split up, a lot of social media users including their co-celebrities openly supported this notion.

Samuel Jemitalo, the Nollywood actor, warned men not to consider getting married to a successful woman.

“Men, never marry a woman that has made it… she will never respect you….” I have written.

“Small quarrel and Funke Akindele asked her husband JJC Skillz to leave the house. For those of you that have been asking for ages, this is exactly why men avoid independent women. We are not intimidated by your success; We just don’t want to be humiliated in this manner someday,” a user wrote. 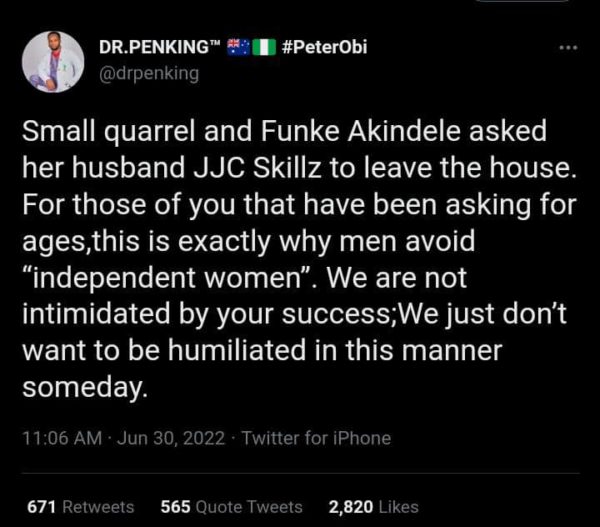 A social media user, however, faulted such a narrative.

“If the only thing you can get from Funke Akindele and JJC’s separation is that a woman who’s is hardworking cannot have a stable marriage, I put it to you that you are dumb. Such a stupid logic. Ngozi Okonjo Iweala must be a lazy woman then,” the user wrote. 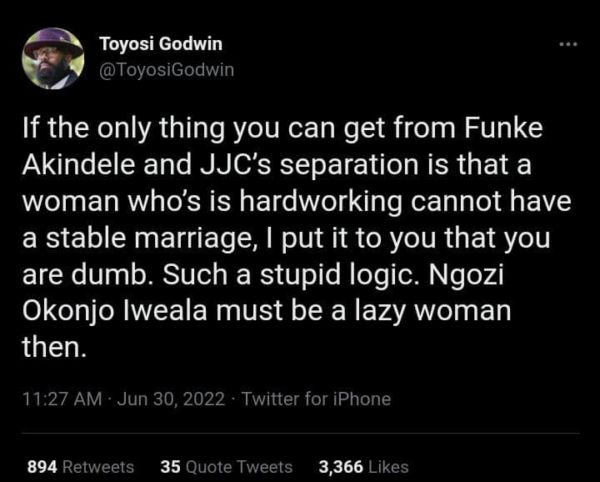 Toolz, the media personality, also wrote: “We don’t live in their house, but it 'has' to be Funke’s fault because she’s a successful woman. What a lazy narrative. Please ladies don’t get too successful.” 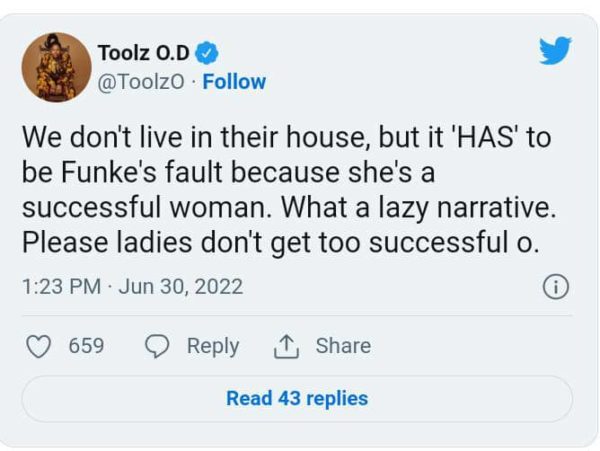 Also giving her opinion on the matter, Stephanie Coker-Aderinokun, the media personality, said failed marriages are not peculiar to only people in the entertainment industry.

She also faulted the narratives that celebrity marriages are “constantly crashing,” saying they are just the most publicized.

Copyright 2022 TheCable. All rights reserved. This material, and other digital content on this website, may not be reproduced, published, broadcast, rewritten or redistributed in whole or in part without prior express written permission from TheCable.

How much does it cost to buy a home in the world’s most liveable cities?

Twin Cities restaurant openings, closings and events you should know about